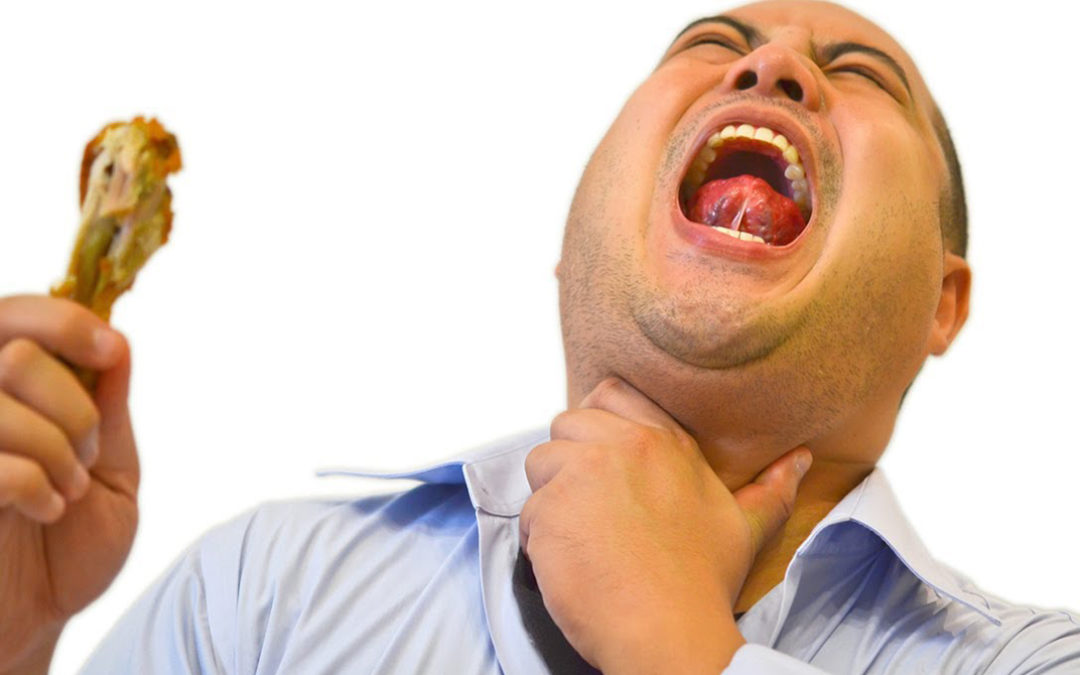 Choking sometimes called an airway obstruction, is when an object prevents a person from getting the air needed. Back blows are the first step to helping someone dislodge something from their throat followed by abdominal thrusts. Abdominal thrusts are also called the Heimlich Maneuver.

This common breathing emergency doesn’t always end up with a trip to the hospital, but shouldn’t be taken lightly. The most common cause of choking is food getting lodged in the throat but this isn’t the only cause. Allergic reactions can also lead to swelling of the throat glands, preventing air from flowing through. Swift action is needed to prevent a choking adult from falling unconscious.

Follow these 3 steps when assisting an adult who is choking:

Adults should be able to communicate with you in some fashion to get consent. Always get consent before rendering any aid, especially if it involves touching or holding someone.

Approaching a Choking Adult and Getting Consent to Aid

Most adults will start to cough and clutch their throats when they begin to choke. Their eyes may tear up and they might begin to panic if they are unable to get air. Approach with caution and ask them, “Are you choking?”

Wait for the reply which will most likely be a head nod. If they are indeed choking, follow up and ask, “May I help you?” Remember, consent is critical even when trying to save someone’s life. If they fall unconscious, consent is then implied. Until then, you need to get some communicated consent, if even by smoke signal. 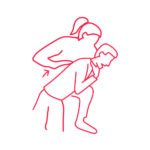 Get the person into the proper position. Standing behind the person, extend one leg to the side of front of them. Position one arm across their chest and direct them to lean over from the waist.

Using the heel of your hand, give 5 stern back blows between the shoulder blades. Make sure to use the heel of your hand where the pads of the palm cushion the blow and protect the spine. Each blow should be strong and independent of the following back blow. Be attentive to whether the object becomes dislodged. 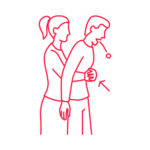 Often referred to as the Heimlich Maneuver, this move is also performed from behind the choking adult. Wrap your arms around the person, positioning your thumb just above the navel. Make a fist and place the other hand over the fist. From this position, pull up and in quickly with force. Repeat this five times.

Abdominal thrusts force the air already in the lungs to expel at tremendous force. Often within the first two thrusts, an object can be seen launched as a projectile from the person’s mouth. 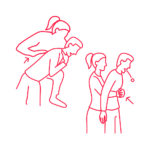 If after the first five abdominal thrusts, the item is still lodged and obstructing breathing, repeat five back blows and then five more abdominal thrusts. Alternating between sometimes changes the dynamic of how an object gets dislodges. In fact, a change in position for the person choking sometimes is enough to dislodge an item.

Don’t stop alternating 5 back blows and 5 chest thrusts until either:

If the person turns blue and or passes out, this is a clear indication that no oxygen is getting past the obstruction. From your position standing behind the person with your arms around their front, you should be able to catch them and gently bring them down to the ground safely. Make sure your weight is centered on that foot positioned to the front so you don’t get hurt yourself.

Signs of a Choking Adult

Holding or clutching your throat is pretty much the international sign for choking. Most people have a look of shock on their face before they start to panic. People will often cough, wheeze and make high pitched sounds when breathing if they are choking.

As the situation becomes more extreme with air being significantly or completely blocked, the person’s skin will get bluish. With enough time struggling to get air, the person could become unconscious. 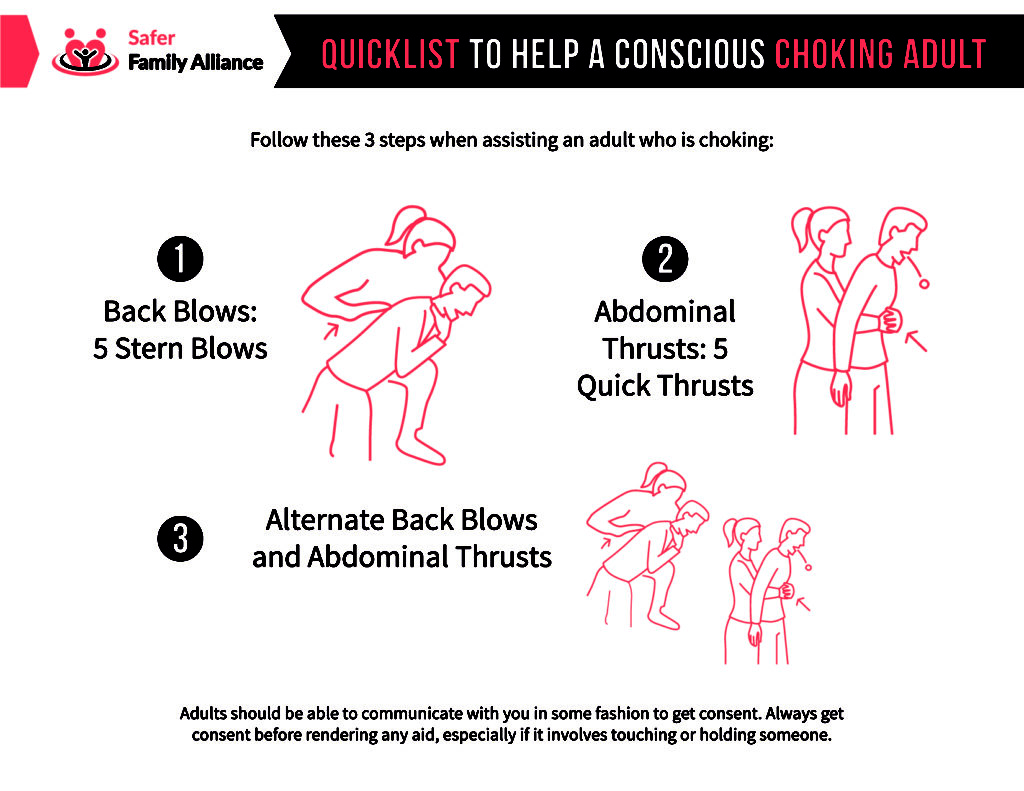 Choking isn’t always the result of food or object obstruction. If a person wasn’t eating, it is likely they are having a different medical emergency, often times an allergic reaction. Some people have serious allergic reactions to bee stings and bug bites – even certain foods such as peanuts. If bad enough, a person could go into anaphylactic shock, a condition where the glands in the mouth and throat swell shut.

Trying to dislodge an obstruction in this type of scenario is futile. Seek immediate medical attention and call 9-1-1. If the person is conscious, ask them if they have an epinephrine pen (Epi-Pen). If they do, locate it and hand it to them. The pen has the properly prescribed dosage of epinephrine for that person. It sends adrenaline through the system to fight against the allergic reaction.

If the person has an epinephrine pen but isn’t conscious and you know this is an allergic reaction, open the pen, placing the administering end on the thigh. The pen works even though thick pants such as jeans. Press the button and the prescription is automatically administered.

Get the person to the hospital immediately after using an epinephrine pen. Their heart must be monitored for 24 hours and their other symptoms reviewed to ensure complete recovery.

While choking can happen at any time to anyone, it is most likely to happen to adults who are rushing when eating. People who laugh and talk with their mouths full are more likely to get choked. Drinking alcohol before a meal can reduce reflexive swallowing contractions leading to choking. Elderly who wear dentures and don’t chew food completely before swallowing also have an increased risk of choking. 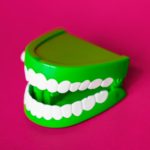 Most choking emergencies can be prevented with attentive eating habits. Making sure food is cut to proper sizes and chewed completely before swallowing reduces the risk. While everyone enjoys dinner-time conversation, good manners of chewing your food and not talking with your mouth open help reduce incidents of choking while eating.

The most common reasons for choking are avoidable if adults take the time to slow down when eating, cut and chew food into smaller portions and not get distracted with conversation and laughter. With that said, elderly adults should be monitored. Making sure dentures are properly fit is a key way to prevent elderly adult choking.

If you are looking for more information on CPR and First Aid, please visit our resource center.